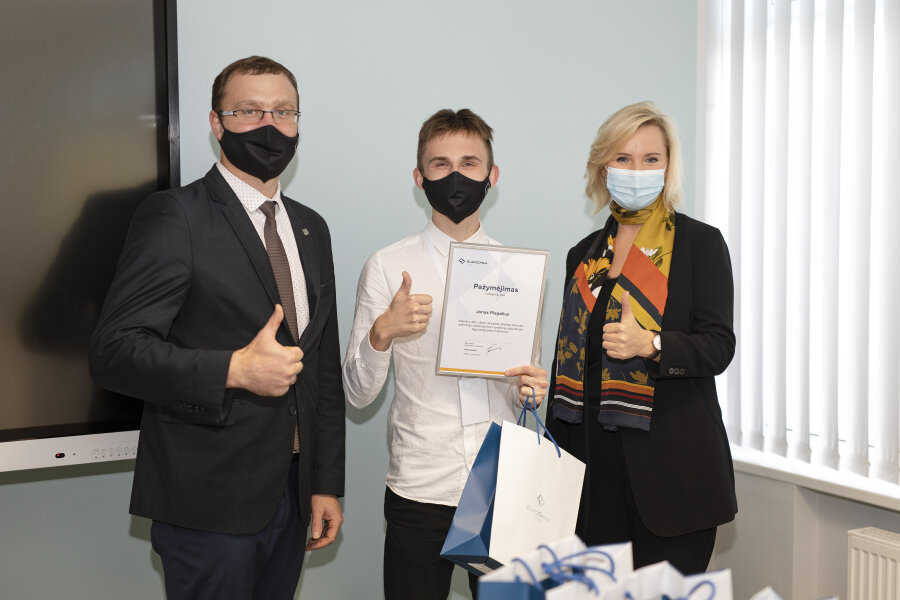 Winner of Formula for the Future and candidate for the Lifosa AB EUR 1,000 Scholarship announced

The annual EUR 1,000 scholarship is offered for a secondary-school graduate who, after winning the Formula for the Future competition, goes on to enrol in a degree programme in chemistry.

Based on the knowledge and prowess demonstrated by the runners-up in the second round of the competition, a decision was made to award additional prizes to these three youths. The three students are now candidates for one-off scholarships of EUR 350, subject to their enrolling in a degree programme at the Kaunas University of Technology’s Faculty of Chemical Technology.

Invitation went out to the brightest students

The invitation to participate in the competition went out to 12th grade students from six gymnasiums in Kėdainiai District. Those who expressed an interest in competing in Formula for the Future were asked to submit their applications and personal statements, complete with their 11th grade transcripts and copies of any awards conferred to them at chemistry competitions and olympiads.

Four students from two different gymnasiums in Kėdainiai were invited to compete in the second round, which took place on 23 October. These were Giedrūna Pavuolytė, a 12th grade student at Kėdainiai Atžalynas Gymnasium, as well as Justina Medekšaitė, Jonas Piepalius and Jovaras Haimi, all from Kėdainiai Bright Gymnasium. These bright students demonstrated their knowledge and abilities by taking part in a theory test and conducting a practical experiment. 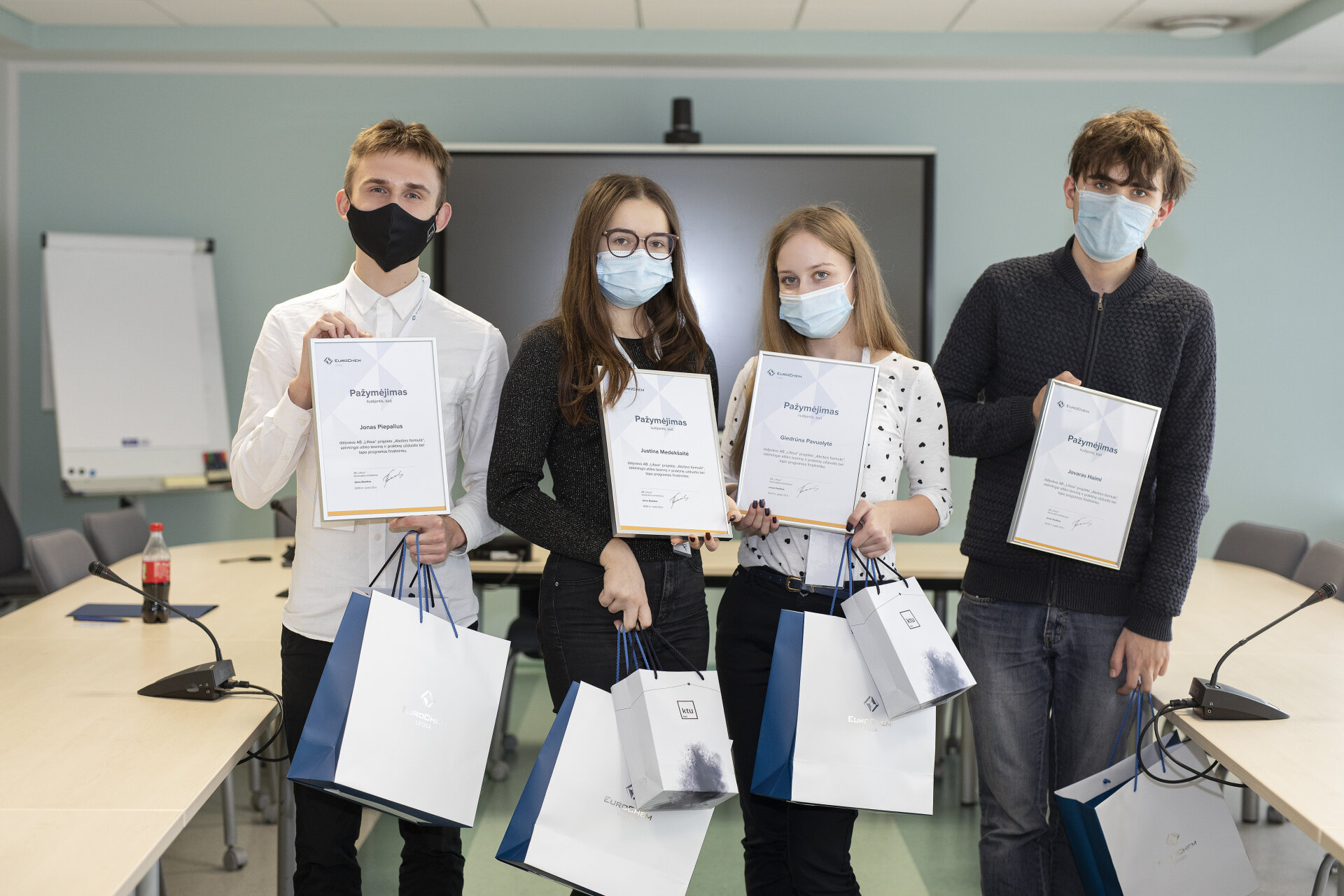 ‘We are very pleased that a group of students who are genuinely interested in the science of chemistry responded to our invitation to participate in the competition. The participants had already gained some practical experience during a summer internship. They had represented their schools in olympiads and had participated in dedicated projects to deepen their scientific knowledge. All four of the finalists were highly motivated and every one of them deserved to win,’ said the Committee Chair of Formula for the Future, Asta Švobienė, HR Manager at Lifosa AB.

The choice of 23 October as the date for the second round of the competition was no coincidence, as this is Mole Day, an important occasion for chemists. During the event, the participants took part in a theory test, which was later followed by a practical experiment in the company’s lab. 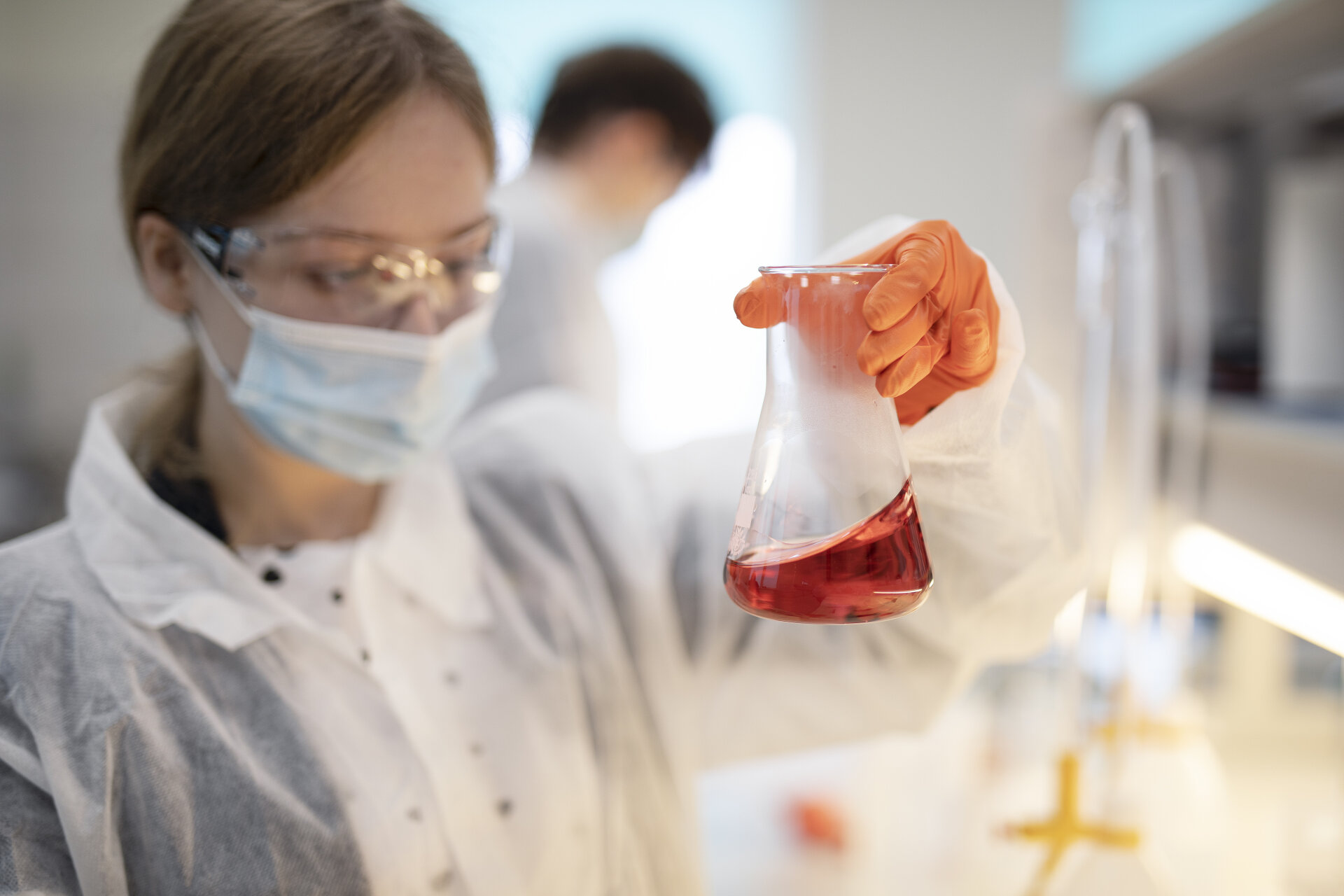 The objective of the experiment was to determine the concentrations of CO2 and phosphoric acid in a popular soft drink. The theory test, as well as the practical experiment and the assessment criteria, were prepared by a group assembled from the Faculty of Chemical Technology ay the Kaunas University of Technology (KTU).

‘We’re grateful to the Dean of the Kaunas University of Technology’s Faculty of Chemical Technology (CTF) and its scientists for working with us and for their support in organising this competition. Formula for the Future is yet another shared initiative, which has only strengthened our long-term partnership. We firmly believe that combining the potential of the university and our company enables us to contribute to educating the younger generation, and to training the professionals and scientists of the future in a meaningful way,’ Švobienė said.

Numbers of chemistry professionals will decline

Lifosa’s representative noted that there is a discouraging trend for declining numbers of Lithuanian students choosing to enrol in degree programmes in chemistry and physics. This was also evident in this year’s competition. According to Švobienė, teachers from the district’s gymnasium pointed out that only a small number of individual students are choosing to study chemistry as a subject nowadays, while in some places no 12th grade students have decided to take the final chemistry exams for at least five years.

‘Along with the change in the number of those taking the final school chemistry exam – 1,069 students took the exam this year, while last year this number was 1,263 – there’s been a marked decline in interest in pursuing a chemistry degree. A commonly-cited reason for this is that young people are not aware that certain degrees are marketable and will enhance their career prospects. When looking to hire new members for their teams, modern day companies do not pay close attention to the specific degrees of young applicants, but rather focus more broadly on the field of studies such as Technological, Engineering or Physical Sciences,’ said Prof. Baltakys, Dean of KTU CTF.

According to the Dean, it is essential for higher education institutions and prospective employers to appreciate the need to work hand-in-hand by educating the younger generation, initiating new projects and talking about career paths and new opportunities. The pressing need for new educational initiatives is also recognised by teachers.

‘I’m very glad we now have a programme such as Formula for the Future. We really need support and initiatives like this to be able to spark the students’ interest in this subject. However, I should add that in my view, the programme should focus on students in earlier grades, as it’s crucial to spark their interest before they decide what subjects to take in their final years. 12th grade students no longer have this option, so it is difficult to attract interest in pursuing degrees within the field of chemistry,’ said Daiva Ivaškevičienė, Teacher of Chemistry at Kėdainiai Bright Gymnasium.

For their part, Lifosa’s executives noted that the experience gained from this year’s Formula for the Future will be instructive in designing the company’s future initiatives dedicated to educating young people and popularising science.

‘While running the Formula for the Future programme, we set our sights on the pressing challenge the country is facing – namely, the fact that fields such as physical, engineering and technological sciences are struggling to attract young talent. This was our pilot project, and we might make some adjustments to it in the future. Our current goal is to identify the most effective means of encouraging young people interested in studying these sciences, and helping educational institutions guide their students along this admittedly tough but highly promising path, which is of real importance to the country in terms of scientific research, business and industry,’ explained Juozas Baniota, Director of HR and General Affairs at Lifosa AB.

The Lifosa Director also noted that the company has always paid special attention to educating children. Lifosa has been a proud partner of national competitions in the Lithuanian language, chemistry, mathematics and the Russian language for a number of years. In October 2019, Lifosa AB signed a cooperation agreement with Vytautas Magnus University and Kėdainiai Bright Gymnasium. Through this agreement, the parties are committed to strengthening the partnerships between education, science and industry, as well as focusing efforts to increase the interest of students in science and technology, and working hand in hand to nurture the future professionals in this field.