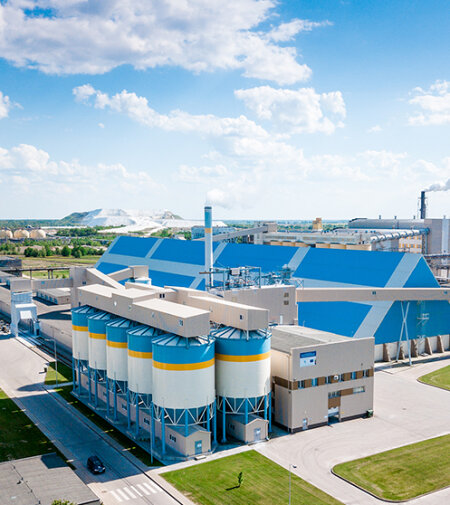 AB Lifosa is one of the largest and most modern fertilizer manufacturers in Europe. The company is situated in Kėdainiai, the geographical center of Lithuania.
Lifosa mainly produces phosphate fertilizers for soil enrichment and fertility.

Around 93% of the AB Lifosa's production is exported. Most of it is realized in the European, as well as in North and South American, African markets.

From the end of 2014, the shares of AB Lifosa are controlled by EuroChem Group. Registered in Switzerland, the canton of Zug, this international group is among the world’s largest mineral agrochemical companies.

The company has a railway branch which supplies raw materials and also transports most of the production. The total length of the railway branch within the territory of the Company is 18 kilometers.

The total area of the Company is 292 hectares.

The main product manufactured at AB Lifosa is the nitrogen-phosphorus fertilizer Diammonium Phosphate (DAP), the process of which requires phosphoric acid and sulphuric acid, which are also produced at the Company. Fluorine, the by-product of phosphoric acid process, is further utilized and reprocessed into Aluminium Fluoride. Feed additives, such as Monocalcium Phosphate, are produced from phosphoric acid.